The 2021 Electric Challenge Champion Michal Skoček gave us an insight into his personal life, shared his feelings on winning and provided us with his refreshing life philosophy.

Hello Michal, nice to finally talk to you. We all know you very well. But for somebody out of the community, how would you describe Michal Skocek?

Hello Pavel, nice to see you too. I would describe myself as a person who is always optimistic, I like to enjoy life as much as possible and I set goals and challenges for myself, and I pursue them as much as I can. I also tend forget about the negative things that happened to me, I try to think only about the positives. 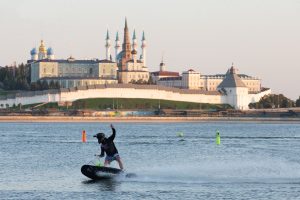 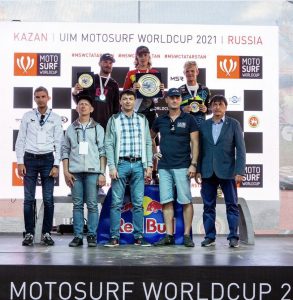 How did you get started at Motosurf? What path led you to join the WorldCup?

I always tried to dedicate a part of my life to sport, I did wake boarding behind a boat, and when I saw Jetsurf, it really got my attention. I really liked the idea of “effortless” surfing where you don’t need any waves or ropes. So, I ordered the Electric Jetsurf and I wanted to be the first one in Czech Republic to have it. That was my dream, I wanted the Electric Jetsurf for recreational riding.

Wow, so you were the first person in Czech to own the electric board.

According to the information I got from the factory, I think I was the first owner, yes.

How would you compare this year’s season with the previous one? It was your personal best accomplishment in this sport, so I assume there was some difference.

Well, I started last season. I attended two races, and I must say, it was a complete disaster and an embarrassment for me. But at least it got me very motivated because after that, I told myself that the next season I must perform as best as I can, so that everyone forgets how bad I was. This was my first full season. I wanted to attend every MotoSurf event. I bit my tongue, I trained very hard, and I tried my best. Luck also played a big part in this championship. Matěj Kožíšek and I were performing very similarly. He is a lot younger, rides longer than me, but he is not as proficient on the Electric Jetsurf, so that really played into my cards. The petrol board and electric board have different riding attributes. Until the last race it was a very nerve wrecking and a close battle. This motivates me a lot, because I always say that age is not the determining factor and if a person wants to achieve something, he must go after it. 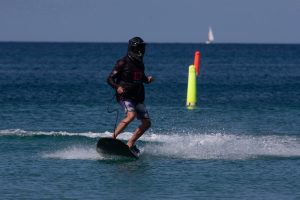 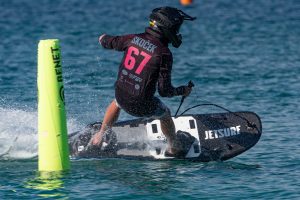 Do you have a personal hero of yours who inspired you?

Yes, I do. My personal hero is my dad. He is my hero because when he was 49, he made a bet with my brother about who could bench more. They started to go to the gym together and my dad managed to become a world champion in Powerlifting at the age of 54 and he also won the year after as well. Now he is in his 80s and he still goes to the gym and is keeping himself fit. This resonated with me because it is a proof that you don’t have to be young in order to achieve something, you can pretty much start at any age. It depends on the mindset.

Do you have a workout routine or a diet that you keep?

I must laugh at this, because I do. Some racers have a beer or two the night before the race day. Because I’m 42, I have to take a painkiller pill before the race so that I don’t feel pain. But seriously, I don’t really have a routine. I go to the gym, I do circuit training, I try to eat healthy, and I try to keep myself in a good shape. But mainly I have my lucky shorts that I always wear. One race, I forgot them and I was so stressed, that my friends had to go and get them for me. So that is my only routine and a weakness you could say. If you want to take me out of the race, just break into my caravan and steal my shorts. 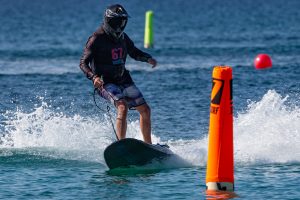 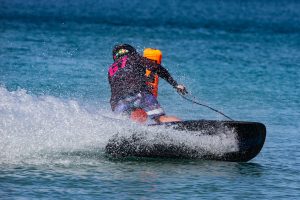 Have you done any other kind of competitive sport?

No, never. I stress a lot with this kind of stuff, so I always avoided it.

Could you describe your emotions after you won the Championship? Did you get any sense of self-satisfaction? Was there a tear?

I got self-satisfaction that my hard work paid off. I had a feeling of happiness and a boost of motivation to continue next year. Yes, there was a tear, I had to get myself together because there were people standing around.

Do you have a personal philosophy that you follow?

My personal philosophy whether it comes to my personal life, or a professional life, is that I try to be a decent human being. That’s kind of the basic and from that sprout other things. I try to be optimistic, even when something negative happens. I try to extract the good from it. I try to take it as it is and learn from it. Failure isn’t a disappointment but an opportunity to learn. I also like to say what I think. It may not be comfortable for everyone, but that’s just how I’m used to do things.

Could you tell me about your life’s biggest achievement?

My biggest life achievement is that I am a stand-up guy and a decent human being who can look at himself in the mirror in the morning. I don’t have to be embarrassed of what I do. I’m not saying that I’m not wrong sometimes, but when I am, I have no problem with apologizing and admitting my mistakes. For the past 17 years I also have my company, which is like my baby, so I try to take care of it. The biggest achievement in context of the company is not that the company is doing well, but that I have employees who have been with me for the last 17 years. I dare to say that they are satisfied working there and that is a sign of success to me. 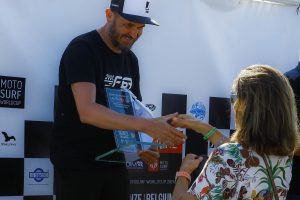 How do you spend your free time?

My company is preoccupying me a lot, and for the last year and a half, I have been dedicating my time to Jetsurf. I like to go on vacations with my friends, do sport, go on walks, nothing too extreme like Jetsurf.

Do you have any talents that many people don’t know about?

I studied at a conservatory, so maybe the hidden talent I have, is that I can play the trumpet. Many people don’t know that I’m a musician. I haven’t played in a long time, but I managed to complete my studies, so maybe there was some talent.

What advice would you give younger people?

Be an optimist, try to adapt to different situations. The world right now is changing very fast and it’s good not to get stuck on the negative aspects of it. Try to keep moving forward. I would recommend young people to look forward, because the world isn’t going to get easier and it changes so fast, so don’t get stuck on something that worked yesterday. Because it doesn’t have to work tomorrow 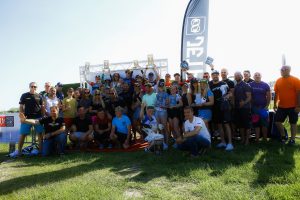