Two rounds down and five countries in the lead of the Stock class – a lot to expect in this shootout!

The Stock Class is the latest addition to the MotoSurf World Championship racing. Fair class, as it’s called, introduced a completely new concept of racing not allowing any mechanical modifications on the racing machinery. Trendy class among the racers brought attention of many around the world. Racing with JETSURF TITANIUM DFI with very restricted possibilites of personalization brought a stream of racers from many countries to the world’s best motorized surfing championship.

It was all about dominance of Czechs so far but the last two years seem like game changing seasons for the motosurf discipline. After two rounds of the Championship, we saw two different winners and pretty much even very different podium finishers mix at both the GPs. After Inter.MX México GP, it seems like the Stock class forms a plot to follow with super tight points differences between the riders from 5 different countries and 3 different continents. Who are these leading the pack?

Down Kim was aiming for the MotoSurf top spot from the last year campaign when managed to score several top 3 finishes in a couple of heats and even a podium at MotoSurf of Nations – individual competition of men. The season opening round in the Czech Republic was a disaster for this super fast racer from South Korea. However, the shortened program in Czech helped not to lose that many points. In Mexico, Down struck in style and dominated the second round of the championship which brings him overall leading with 175 points. 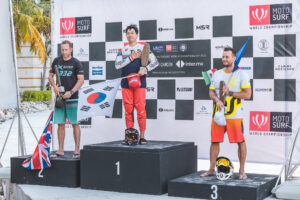 MotoSurf Games in America recruit, Ayrton Eboli debuted in Croatia 2021 with 4th place finish. This year, he aims for even more and attacks the top 3 of the championship. In the Czech Republic, he opened the season with 2nd overally but leading the field before his home GP in Mexico. The round in Cancún wasn’t the best for Ayrton but 6th place and 169 points currently keep him in 2nd position just 7 points off his South Korean competitor. 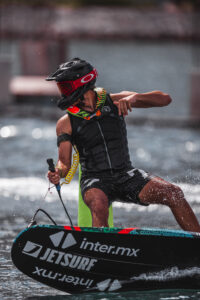 (Ayrton Eboli at his home GP in Mexico)

Speedster from Kuwait – Hassan Boabbas, surprised the whole world of motorized surfing with victory in the Czech Republic. Maiden victory meant something very special for this likeable Kuwaiti. In the second stage in Cancún, Mexico, Hassan made a great job finishing 4th for 3rd in the current standings. 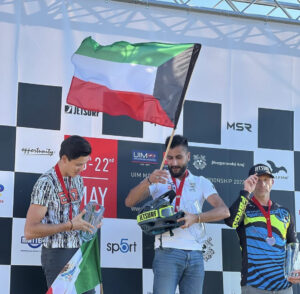 Czech Republic’s Ondřej Vymazal is one of the most experienced and most consistent riders in the MotoSurf World Championship. He has been racing for many years and his experience result in great consistency. Only 16th place in the Czech Republic wasn’t very promising result but strong 3rd place finish in Mexico lifted the Brno based racer to 4th overally. 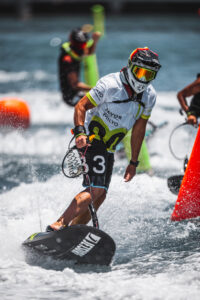 (Ondrej Vymazal going for his first podium of the season)

Rui Merralls from Great Britain is known for his skills, speed and racing passion. The Briton started the season in the Open Class but from Mexico and further on, we will see rider number 232 competing in the Stock Class. Racing in the equalled machinery class was a clear goal for Rui who proved his confidence and skills in Mexico finishing 2nd and taking 126 points back home for 5th place in the standings. 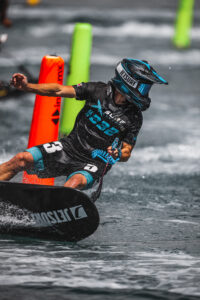