The UIM MotoSurf World Cup 2021 final stage in Zadar, Croatia, concluded the 2021 season in style. The championship of motorized surfboards arrived to Croatia for the first time where competed in wonderful facility of the Falkensteiner Premium Camping Zadar. The spectators could see incredible number of 98 riders from 12 countries from all around the world in the categories of Men, Men – Stock, Women, Juniors, Rookies and Electric Challenge.

In the Open Class, the championship remained open until the very last session between multiple champion Lukas Zahorsky and Nikolas Blaha. Lukas turned over the championship after GP of Tatarstan (Kazan, Russia) and kept his 4th Championship title hopes alive. The runner up, Nikolas Blaha, came to Croatia ready more than ever to chase his first championship glory. Eventually, Lukas Zahorsky managed to defend his compatriot’s attacks and gained another WorldCup title under his belt. Racing for the JetSurf Factory Team, Lukas Zahorsky becomes rider with most titles in the sport’s recent history. Third place was taken by a young talent – skiing and jetsurfing racer Stanislav Kovar who debuted in the class just this season. He managed to keep his position from the ex-champion and ex-MotoGP racer Jakub Kornfeil.

In the women class, there was no doubt about Mattech Racing’s  Aneta Sacherova claiming the position of the Champion. She dominated the weekend in Zadar and collected 4th WorldCup title. Young talent Aneta Stloukalova representing MSR Engines Racing Team concluded the season as the second fastest lady right in front of her team mate Klara Sitarova. Great Britain representative Anya Colley showed great performance through the season to finish 4th overally. A premiere start in the series opened the WorldCup scene for USA’s Alaia Flores and Mexico’s Arantxa Flores. Both riders managed to squeeze into top 12 and proceeded to the finals as the only representatives of American continent in the women class.

Stock class is the latest edition to the racing format of the MotoSurf WorldCup. Equalled machinery saw a great interest from many riders all around the world and the one who controlled the season is from Slovakia. His name is Marek Skamla and he gained the first ever WorldCup title in the class and first ever title for Slovakia. Czech Republic’s Petr Pozdnik made it to the 2nd place overally while Alain Coppens from Belgium, scored first ever podium for Belgium in the MotoSurf WorldCup series. Ayrton Eboli from Mexico debuted in the class and impressed the field right from the beginning ending the weekend in respectable 4th.

In the Juniors, the girls and boys kids competed at all stops of the championship. Eliska Matouskova dominated the season from her rival Linda Lukscheider – sister to Alex – and the family sensation was completed. The first boy classified in the championship was incredibly progressing rider from the Czech Republic – Oliver Navara.

Another new class put in the championship – Electric Challenge – saw the first ever crowned fully electric powered discipline WorldCup champion. It was a close battle until the end between Michal Skocek and Matej Kozisek. In Zadar, Matej Kozisek gave a trump card to Michal in round of 8 after missing a buoy. Michal took over the opportunity and won the race in Zadar which puts him on the position of the first ever MotoSurf Electric Challenge Winner. Matej Kozisek remained 2nd and Belgium representative Alain Coppens completed the top 3 and collected his second trophy.

The day arrives - MotoSurf World Championship shows up in Cancun, Mexico for the first time in the history. Hot weather conditions, turquoise Caribbean sea and starting grid full of ambitious and hungry riders desiring for the victory....

The day arrived - MotoSurf World Championship shows up in Cancun, Mexico for the first time in the history. Hot weather conditions, turquoise Caribbean sea and starting grid full of ambitious and hungry riders desiring for the victory.... 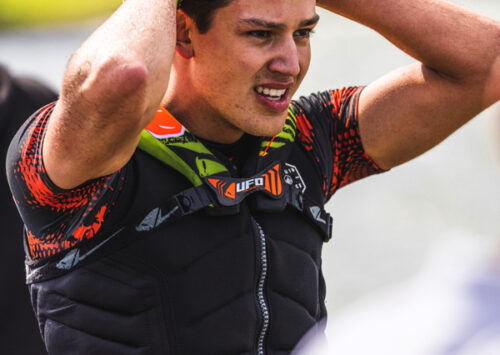 UIM MotoSurf World Championship started at the end of May in the Czech Republic. The Stock class – category for non-modified motorized surfboards – brought super close racing action seeing a debuting permanent rider to the Championship...